The Human Senses and Time

The performance I created for Exentricité was entitled “The Human Senses and Time.” I created and performed it with Turkish curator Fatos Üstek at the observatory La Meridienne in 2012. The performance reflected on some of the issues outlined above. On an explicit level it was foremost an attempt to connect performers, researchers and audience with a lost time when time-keeping functioned differently from what does today – a period where when man had to look to the sky to measure time. 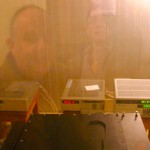 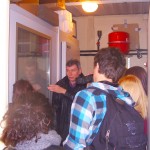 In the performance, groups of 12 people were guided on a journey from the present to the 19th century via a “time machine, “ a set of different trips that provoked reflection on time and temporality. The journey started at the contemporary part of the observatory. Here the audience met the institute’s director François Vernotte who introduced the atomic clocks that allow the researchers to measure time in the most precise way currently technologically available. 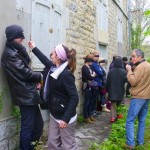 The audience then moved into the garden where I briefly introduced the project. After that the whole group walked together to the ancient director’s villa, which is a beautiful 19th century building that has been disused for a long time. The group was informed that they would embark on a journey to the 19th century. They were then blindfolded, which is necessary for time travel. The audience was then administered different tasting foods that would prepare them for the journey in time. 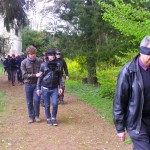 A guide (student volunteers at ISBA helped us guide the audience) then took each blindfolded member and led them through the foliage, across a small road onto where the “time machine” was located. The time machine was a 60m long rope that was stretched at hip height across a beautiful orchard. The audience members were asked to follow the rope which led them through the greenery and into the past. Some unexpected objects and substances were attached to the rope to aid the time travel. 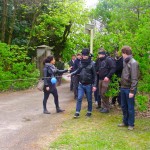 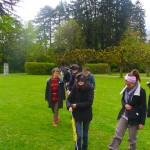 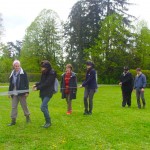 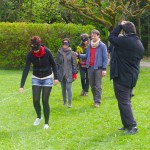 Once the audience member had travelled through time, a ghost guide led him/her up a set of low stairs and into a building. Here the audience was told that they were standing in front of a large and beautiful state of the arts time keeping device (a giant 19th century telescope). The solitary man who was in charge of the giant clock was living in the dark (just like the blindfolded audience members) since his star-gazing work was entirely nocturnal. At that time, like today, Besançon was worldleading in measuring time with the greatest accuracy. But 150 years ago, it was the stars that allowed the scientists of the day to measure time with the greatest of exactitude. In order to use the old time keeping machine, it was very important to be able to count the passing seconds with great exactitude.

The audience was asked to imagine what the machine and building looked like. During this time they were bombarded with different smells that activated their olfactory senses and stories from the prime time of the observatory. Finally they were asked to imagine the 20 women who are making calculations of the observed movements in the sky while strange noise impressions appeared around them made by their invisible ghost guides. The performance ended when the ghost guides left the room and the blindfolds were removed so that the audience could see the beautiful machine.