For the OuUnPo session  “We Are what We Lost,”  November 7-16, 2014 Per Huttner organised a collective performance where seven members of the OuUnPo network led the audience through a specially designed tour of the tactile collection of Pinacoteca do Estado de Sao Paulo.

The performance started with a short introduction to the tour and what would follow. In order to underline the tactile aspect of the experience, the artist deprived the audience of one of its senses. Rather than depriving them of their sight, which would be the expected thing to do, he made the whole performance silent. No words were spoken once the instructions had been introduced. (While the audience was waiting to be taken on the tour, they were asked to remain silent, while filing their nails and gaze at the beautiful garden of Parque da Luz.)

The audience was led through the collection by a member of OuUnPo one by one.  Before they embarked on the journey through the museum collection they were asked to put a white glove on their right hand if they were right handed and a black glove on their left (and vice versa if they were left handed.) The audience was informed that “the white-gloved hand would touch the past and the black the present” (the person leading them.) They stretched out their black-gloved arm and the guide did the same. 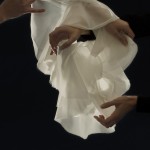 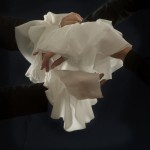 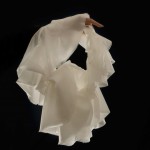 A specially designed garment by French fashion designer Emilia Rota was put between the two hands and the couple was sent off to investigate the tactile collection of the museum.

The tour started in the “normal” collection and each pair crossed one of the walking bridges at Pinacoteca to enter into the tactile collection. The guides also encouraged the audience to touch architectural details and other non-art objects (while touching the sculptures and their guide at the same time.) At the end of the tour, a small piece of the guides’ black sweat shirts was cut off and pinned to the visitor in order to give physical proof that they had undertaken the tour. They were then led into Stephen Whitmarsh’s IAT performance where they got to test their propensity for racism.

The performance formed a part of a day to reflect on the past at Pinacoteca. Other artists included Natasha Rosling, More Paper, Carla Zaccagnini, Videobrasil, Stephen Whitmarsh and Laercio Redondo.

The Garment is made up of three interconnected circles that create a far more complex Möbius strip. Here you can see what it looked like before the two ends were connected. (Of course, it has a special Swedish soundtrack.)