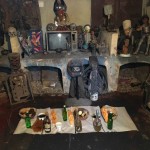 Revolution Cool Kepopoz was Per Huttner’s contribution to the 6th Ghetto Biennial in Port-au-Prince. It was a performance that was created to merge the traditions of Haitian Vodou and experimental music. The performance was a homage to Claude Saintilus whom Huttner was also performing with. Huttner played live electronics where all the sounds were recorded in Saintilus’s everyday life. Pierre Adler were controlling video images that Huttner had recorded and electronically enhanced. All images depicted Saintilus’s home and studio. The event became a portrait of the artist’s immediate surroundings.

More documentation will be added shortly.