Or else thought reverses everything—judges, lawyers, plaintiffs, accusers, and accused—like Alice on a plane of immanence where Justice equals Innocence, and where the Innocent becomes the conceptual persona who no longer has to justify herself, a sort of child-player against whom we can no longer do anything, a Spinoza who leaves no illusion of transcendence remaining.” ‒Gilles Deleuze and Félix Guattari 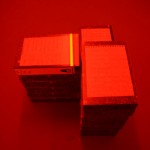 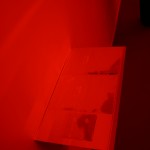 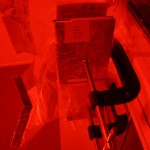 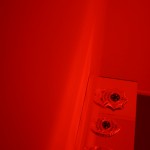 The light that shines through the doorway of mirrored panels is overpowering, an immediate focal point that captures attention as one enters the subdued waiting area of the Quantum Police Station. There is no access to the room from which the light emanates although one can hear a conversation taking place behind the mirrors. It is one-sided; a man speaks out loud questioning the person he is interrogating, but this person responds only with silence and remains unknown. One must step closer to the doorway to find out who he is talking to — the reflection holds the answer.

In the Quantum Police Station, the space of the interrogation room is defined by the mystery of the unknown. There is no clear reason for the events which transpired before or what happens after. There is no evidence of an accident or crime committed. The Quantum Police work ambiguously, yet one thing is clear, they are the interrogators and society is the suspect. It is the duty of the Quantum Police to investigate and dismantle the deceptive reality of institutional ideals, laws and hierarchies to seek restitution for the conceptual persona of the individual. Justice is delivered not in the confines of a courtroom, only within the infinite landscape of the profound and complex. In this realm, the severe angles of order are replaced by creativity that flourishes and represents a voice that goes beyond reason. 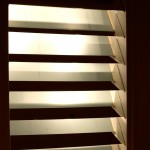 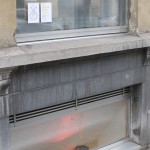 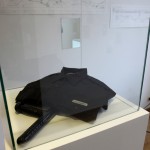 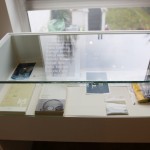 He stands with authority, his head tilted as if listening to words directed at him. Framed in time, his unspoken reply can only be assumed. He is being watched. The viewers anticipate his next move played out across the dimensions of a stone surface. His features are washed out amongst the white brightness of the cell surrounding him and become secondary to the police uniform he wears. It is emblematic, a projection of both respect and fear. At first glance, his role in society, his ideas and his actions are revealed by the clothes, but he is not your typical authority, he is the Quantum Police.

The Quantum Policeman—the interrogator—looks out to the viewers who voice the other side of the conversation. He challenges them to reveal their thoughts, questions and opinions. The uniform he wears commands the trust of communication. In this exchange, the identity of the man is subservient to the image of authority. The Quantum Police rely on conformity to create an enigmatic atmosphere around their physical presence, but their existence is secured by the narratives of the audience. Enclosed in contemplation, their thoughts form their individuality and their awareness. Reality can no longer be accepted without question.

The chords of electronic sound reverberate through the white stillness of snow. A woman’s voice escapes at random, only to be interrupted by the notes of the musician’s improvisation. She is not a victim, but a trusted source of information. As an accomplice of Quantum Police ideologies, he tampers with her message, misconstruing the facts. In his translation, something new is created, a subjective language heard and interpreted by many.

There are Quantum Police agents conspiring in different parts of the world. They are active pursuers of an alternative truth and they challenge what is known in order to discover and create. Their actions are manifested as unique extensions of their own creative being. They shape the history of the Quantum Police and at the same time, carry the movement forward. The woman speaks of the Quantum Police as conspirators; the musician writes them into his songs; the dancer performs wearing a police uniform on crowded streets; the law student advocates a new law for equality of the individual… 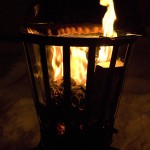 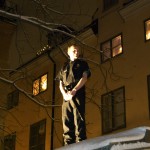 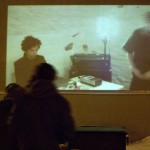 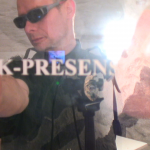 The cold, polished surface of the stone reads: “This sculpture is a portal to a merrier parallel reality. Contact your local police for a manual.” Built as a tribute to the establishment, the defaced effigy now stands as a symbolic message to the public. A creative act of vandalism which took place in the past, but is resurrected in virtual time as a premonition of the future.

Some say the Quantum Police are involved in tampering with evidence from the most notorious conspiracy theories; however, their only crime is an abstract reinterpretation of life. In contrast to the immobile foundations of institutionalized stone, the Quantum Police offer pages of thought written by the mind’s most celebrated author—the creative thinker. The Quantum Police establish their motive for action on the superiority of the mind in order to alter reality and initiate change and progression in society. 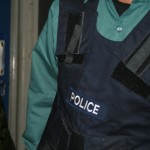 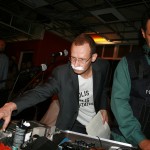 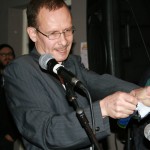 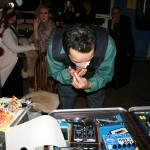 A lone figure walks outside during the overlap of time between night and early morning. The only evidence of waking life is the continuous electrical hum of street lamps and the random barking of dogs. Without warning, the figure’s thoughts are interrupted by flashing light and sound; someone else is present in the muffled darkness. At a tangent point where sidewalk and window frame meet, a faceless voice speaks out to the figure, demanding answers to questions about their involvement in a Quantum Police experience. The figure moves closer to respond to the person who is talking to him through the window, but on the other side no one is there.

The streets of society allow the Quantum Police to make their presence known in unexpected places and under unusual circumstances. Numerous individual accounts about Quantum Police experiences reveal vastly different situations; however they are all united by one consistent observation—their original understanding of the role of a police officer was transformed into a completely alternative awareness. Instead of enforcing the law upon many, the Quantum Police negotiate the best possible solution for the individual.

I have been collecting various questions and observations made by individuals present during previous Quantum Police events and have come to a realization. The act of interrogation is activated on the part of the audience as they seek to formulate an understanding of this enigmatic entity and as a result, their ideas are expressions of that valuable synaptic space of thought where art—when one questions and interrogates it for answers—transcends the mundane and becomes magical, intellectual and provoking.

It’s within this transition, from reality to concept and back again, that the Quantum Police operate, always advocating for the uniqueness which resonates within each person. As the audience revealed to me, the power of creative thinking is the voice of individuality; a process that grows innately until eventually it becomes a contagious awareness to others. One may never understand the Quantum Police, but they remain a potent provocateur for meaningful reflection.