- Performative lecture at Rockbund Art Museum with studedents from Tongji University, May 2012
Huttner had the great pleasure of working with a group of architecture students from Tongji University for the presentation at Rockbund Art Museum entitled “Malleability is Architecture’s Neighbour.” The talk took its starting point in the previously mentioned exhibition “Model Home” and looked at how architecture responds and hosts unforeseen changes over time. Any old building (and there are less and less of these in China) hosts revealing traces of human creativity, problem solving and show the versatility of architecture. Looking at traces of human activities illuminates how individual difference remains a source for inspiration, because people use similar architecture differently in various parts of the world. 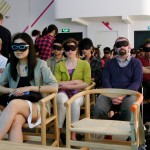 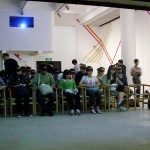 Together with the students, we developed the format that an artist talk normally takes and introduced new aspects to it. We bought blindfolds for everyone in the audience and the students were sent out in the city to buy material that could activate the audience’s four senses – beyond vision. They returned with an array of interesting objects that we experimented with to see how they could affect the audience. We prepared a ritual so that the visitors could smell and taste different substances, listen to sounds and touch objects that were specially selected to correspond to the talk and the images shown.

We blindfolded the audience and then generated sounds around them and through that augmenting the sonar impressions. Anyone who has lived next to a trumpet-player or a drummer knows that sound can be invasive, but probably less so than smell and taste. When the talk veered towards work that incorporated cooking, the audience were asked to put on the blindfolds and then they were literally spoon-fed different foodstuff.

The oddness of the situation provoked a variety of responses among the visitors and also highlighted a problematic that is inherent in any form of collaborative art – where to draw the line between instructions, constraints, rules, commands and free choices? As soon as we are put in situations where humans co-exist, we also have to accept to give up some of our individual freedoms. So the questions remain, how are these negotiated? How do we define the boundaries between individual and collective?

Another important experience from the collaboration with the architectural students relates to expectation. In contemporary neuroscience more and more effort is spent on understanding how our experiences are shaped by our expectations. Scientists have proven that if we are told that a smell comes from an expensive French cheese, we will actually experience the smell far less offensive than if we are just presented with the same bad smell without any indication of what it is.

For the touch experience, we had prepared long ropes with various objects with different tactile qualities attached to them. The audience were asked to put on their blindfolds and slowly pass the rope carefully to the person next to them. It was wonderful to see how each individual members of the audience’s meeting with the tactile experience also triggered responses that were unexpected. It was especially interesting to see how the reaction to the objects attached to the rope influenced the neighbours’ reaction. If one person expressed a sound of surprise it would make the following person more sensitive and alert.

The ritual of putting on and taking off the blindfold together as we went through the slides and the fact that everyone in the audience shared the same sensorial experiences created a special connection between students, audience and the work presented. 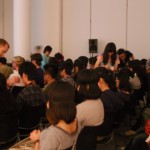 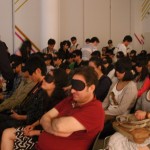 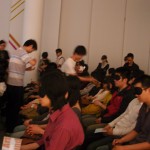