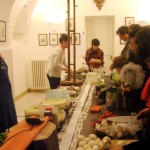 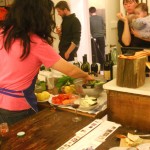 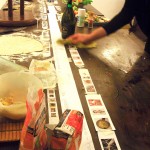 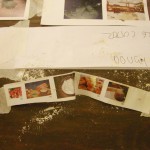 Per Hüttner in collaboration with Aurèle Duda and Åbäke. Part of the workshop L’entremet organised by Geraldine Longueville.
The idea behind the project “L’Ambassadeur” was to take the painting cycle “Le ministre” created by Chinese artist Zhou Tiehai and collaboratively turn it into a sound piece by cooking a meal and making a sound recording of the process. “Le ministre” takes its name from an old French dessert and it raises issues about the culture of eating together and politics. The cycle of 121 paintings is accompanied by a text by French art historian Fredric Le Geurierec. We do not know if the painting were based on the text or the text on the paintings or if they are unrelated.
For the event Hüttner, Duda and Åbäke offered the ingredients to cook the meal along with instructions on how to use the food to produce sound. These were arranged around a long dinner table. In the centre of this table Hüttner displayed miniature versions of the 121 painting cut out from the catalogue along with quotes from Le Geurierec’s text. These were intended to form a musical for the production of sounds and food at the same time. Duda conducted the music that derailed into an inspiring and problematic chaos underscored by a non-functional oven that forced the orchestra/cooks to come up with inventive solutions to finish the sound piece/meal.
Where the original paintings are seductive, the process of creating the performance focused more on the questions of what it means to work together and to translate images and text into sound and food at the same time. The instructions how to produce sounds became a provocation of authoritarianism for some while other gladly followed the directions.
The most interesting and most unexpected outcome of this research process was to see how virtually all of the participants quickly set off on different trajectories to overcome the technical problems, the boredom of being on conveyor like process of producing a meal. The second last of the paintings in the cycle is “a copy” of the The Ambassadors by Holbein that gave the title to the performance. A sound recording of the event edited by Aurèle Duda exist along with photographs by Hüttner. 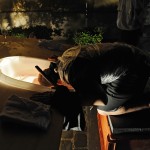 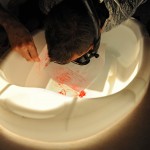 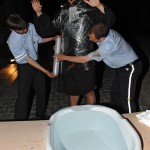 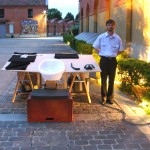 Per Hüttner in collaboration with Aurèle Duda and Jean-Louis Huhta. Part of the banquet “L’entremet” curated by Geraldine Longueville and a part ‘Les vies des formes’ curated by Olivier Michelaux.
For this event, that was based on the experiences on Capri, the group of artists that made up “L’entremet” together created a banquet with 80 invited guests where a meal was interspersed with performances, presentations and other events.
Taking the starting point of the solitude and surround strangeness of the life of any consular worker, Hüttner  and Duda (dressed in police-like uniforms) invited one person at the time to leave the dinner and go through the experience of becoming an Ambassador to an unknown country. Any question about the name, location of the country was met with the response “at home, with us, in our village or town.”

The Ambassador were dressed in a special costume and was wrapped in plastic. A short toast with champagne initiated the new ambassador who was then asked to wear goggles and a snorkel and to put his/her head under water.

Well under water the Ambassador could hear a sound-piece by Jean-Louis Huhta (who had reworked the recording from Capri), see a special light show and experience olfactory experiences. 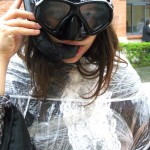