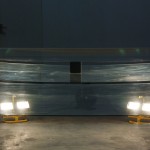 Initium esset, creatus est homo. In order to have a beginning, mankind was created – said Saint Augustine. The German political theorist Hannah Arendt quotes him in the last pages of The Origins of Totalitarianism, her most accomplished analysis of the consequences of violence and dictatorship conducted some twenty years after the main divide of the 20th Century in Europe, the Holocaust.

The promise of a new beginning stemming from a catastrophe, the hope – even the optimism – that Arendt maintains vis-à-vis a lucid and uncompromising denouncement of the potential derailment of democracy into Nazi-fascism, has always fascinated me. We are responsible for changes and occurrences that have consequences in society, in politics, in economy, in the environment. But also, we are also capable of always starting anew. 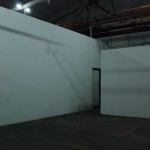 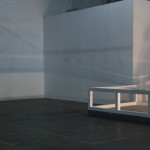 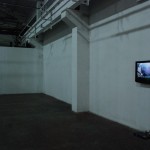 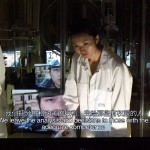 The characters (indeed, characters: they are not individuals: they are similar to those actors in ancient Greek comedian Menandro who represented a social type, an attitude, a role therefore avoiding that specific quality which makes one a singularity) that Per Hüttner presents us with are facing a major change. Some of them can see it, others do not want to, and it is not clear if there is a conspiracy behind the events. But it is clear that the fundamental principles that control western society are at stake and following the plot, we increasingly get the sense that such a radical mutation could lead to a better world.

Fragmented in different screens the story follows the adventures of Leader, Person, Supervisor, Conquistador and Liberator. The screens do not present the story in a linear fashion, which force us to move back and forth across the exhibition space in order to put the pieces of the narrative together. It is as if the viewer is moved into the same altered time-space reality which the characters are living, demanding from us an active role in decoding what we are faced with. Preventing us from being passive observers of reality.

In Plato’s Symposium, perhaps the best known of his dialogues, Aristofanes recounts that once upon a time, human beings had two heads, four arms, four legs, they were complete, a whole, a unity. Because of their arrogance they were punished by Zeus and divided in two halves: men and women. Since then, we look for completion in the other, and such- arguably – along as being a metaphor of love, also serves as a symbol of the dialectic between singularity and collectivity that informs the political organisation of society. In Imminent it is not just the narrative that is fragmented, but also the characters and their multiplied personae. Different actors are cast in the same role, sometime one character is transformed into another, reminding us of the quest for unity that Plato describes. The change of garments can mark a change of personality, there is a constant potential mutation of one in the other. If the principle of singularity is not in action anymore, a new society can surface, one that is regulated by altogether different rules, habits and laws. This is the revolutionary aspect of the transformation, that which someone in the films sees as a threat, someone else as a gift, and someone as a source for hope. 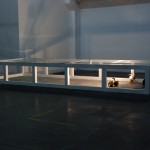 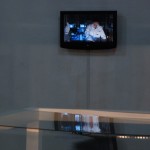 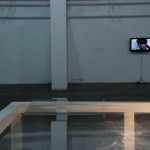 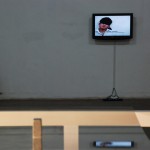 With Imminent Per Hüttner writes a detailed scenario for the first time, composes dialogues, and uses the word as carrier of meaning in his work. In his previous installations such as Do not Go Gentle (2009) – which is loosely connected to this new series of videos – the interlaced stories unravel through gestures and the relationship between characters and objects. With Imminent the artist works in a far less performative and definitively more filmic direction (does he not, in the doubling of scenarios and actors, remind us of Luis Buñuel in That Obscure Object of Desire?)

Film indeed, as Walter Benjamin has argued a long time ago, is the language of modernity. A work that speaks of the future is a rare thing in contemporary art today. Artists tend to be occupied by thinking of the past without rethinking it and to use the archive as collector of nostalgic images, rather than as a dispositive to frame the present.

Loosely circled by the screens, a rectangular sculpture building on the existing architecture of the space, silent, still, inhabits the gallery. It does not seem to have a direct relation to the films. It is not a prop, nor an element that surfaced in the narrative. However the minimalist and minimal grammar it employs, unfolds the possibility of the object to convey our gaze and to reconnect the fragments of the story. It is in the sheer physical qualities of the piece – a reflection, the sparseness, the balance – that a connection to the different films is made. The sculpture becomes a centre, the location to where the fragmented narrative is brought together, ultimately it can be apprehended as a foundation in both literal and symbolic sense. The place of foundation of a new world? The socle du monde?

To locate oneself when writing, is to set the tone of one’s speech, to frame the object in question, to define the field of one’s analysis. In the last months, when I have been talking to Per Huttner about his work, we have both been dislocated. Continuously travelling, attempting to meet in between the complexity of being in different time zones, meeting rarely and never in the same place twice. It has been, despite being a fragmented conversation, an interesting way of sinking into the work and the mind of the artist. Almost by accidental turns, following the artist’s abrupt changes of opinion, finding myself behind when a new path of the research was developed by Per.

Rarely, in the highly institutionalised practice that curating is becoming, does one find oneself in the position to be involved in a new work as an interlocutor and sparring partner rather than a producer. It was a privilege to be invited to be a participating observer and to follow the development of these possible futures. It is from the position of dislocation – geographical, professional, that I write. It is the transformation, that set the mood for this text.