- performed by Per Hüttner and Fatos Üstek    at Senhor da Pedra, Chapel of the Lord of Stone at Miramar outside of Porto April 8, 2012. The project is a part of La Durée and OuUnPo. 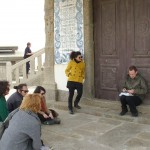 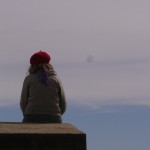 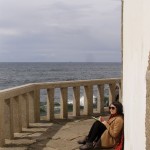 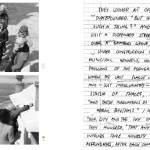 The performance was conceived for a dozen participants in the afternoon on spring Sunday 2012. The two performers met the group in front of the temple on the beach. When everyone was gathered, Hüttner started by giving a short introduction to ideas around contemplation and how we could reflect on ideal places to contemplate. The chapel invites to this in many ways. It is surrounded by the Atlantic Ocean to virtually 360 degrees. One sees sea and sky and how they meet at the horizon. It is hard to avoid thinking about the immensity of the ocean and to reflect on the distance that separates you from, the Caribbean, South America and other locations that inspires fantasy.

But what does it mean to contemplate? What is the difference between thinking and contemplating? Can we define what an ideal place for contemplation is? These are the kinds of questions that Hüttner allowed the group to think about.
After the short introduction, the two performers gave each member of the group a piece of paper and a pen and asked them to look at the location and formulate the ideal space for contemplation and to write it on the paper. Each member was asked to consider what this space looks like. But also what it smells like, how it sounds, what the acoustics are like and what it contains. When everyone in the group had finished writing, they were asked to fold the paper in a special way. 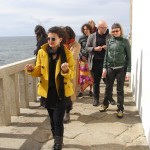 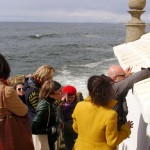 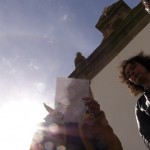 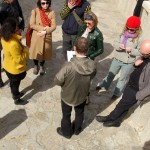 A selected member of the group then got all the texts and hid them around the small temple -without the others seeing where they were hidden. The whole group then followed Fatos. She walked slowly around the temple holding out a small ornate pendulum. She used this to locate hidden texts.
What the group did not know, was that the two performers had already hidden texts of their own choice (on the same kind of paper and folded the same way) around the temple.

The two performers took turn reading beautiful texts, that in their minds described ideal places for contemplation. Per read “Cities and the Sky 5″ from Italo Calvino’s “Invisible Cities,” the end of Stanislaw Lem’s “Solaris” and a passage about Japanese sweets from Jun’ichirō Tanizaki’s “In Praise of Shadows.” Fatos, read from Michael Newton’s “Destiny of Souls Studies between Lives” and Mark Watson’s “Bullet Points”.

Everyone in the group reacted the same way. They were amazed at how well the other participants had written on such short time and that neither of the two performers had read their text. They were not aware of the fact they had been part of a poetic exchange, where their own reflections on contemplation had become incantations in homage to the beautiful place and that they had been given poetic texts in exchange.