DO NOT GO GENTLE

It all began with the disappearance a young physicist who inexplicably vanished when he was about to publish a controversial thesis on the existence of a negative dimension. What happened to him? And how was it possible that years after his disappearance, he resurfaces as a Turkish street urchin? We understand that the man is talking about his son. This strange episode could be linked to the pain of his son’s disappearance. Or could it be connected to the young man’s research? He probed the links between perception and the quantum world. His research, halfway between physics and psychoanalysis, presupposed a radically changed outlook on temporality. He had stated on a number of occasions that he was on the point of discovering an entry point into alternative realities that normally remain hidden to us. Maybe the death of the young physicist describes how quantum mechanics gradually implodes our perception of reality?

This strange episode, probably linked to the pain of his son’s vanishing, could however be linked to Mark’s research. Indeed, before Mark, rare were those to have probed the links between psychic reality and the quantum world so deeply. His research, halfway between physics and psychoanalysis, presupposed a radical redefinition of temporal parameters. He had stated on a number of occasions that he was on the point of discovering an entry into the entirety of the alternative routes that follow our decisions. Routes that normally remain invisible, at least on a conscious level.

Among the research and theories linked to the quantum world, the existence of new realities and other dimensions has already been posited on a number of occasions, without ever moving past the stage of speculation. There is, however, a widely held opinion, that of beginning a dialogue on the duality of subject and object, and their separation in the process of defining reality. Science has broken the glass and transformed the role of the observer into that of the participant, one able to directly influence the reality of the experiment. John A. Wheeler – one of Mark’s mentors, known for having given black holes their name – declared that the concept of the world as “something that is outside of here” no longer exists. It wasn’t just Mark who vanished, but also reality, as we usually comprehend it.

Each disappearance, however, above and beyond leaving traces, opens up new possibilities. And that is how the dualities and dichotomies that habitually rule our experience of space and time will be redefined: life and death, father and son, fidelity and infidelity, interior and exterior space, the imaginary and real world. The once clear boundaries between these polarities are now revealed as blurred and the space that separates them is being reorganized according to psychogeographies and subjective trajectories.

As this sometimes takes place during experiments exploring the sub-atomic world, linear paths, taken on their own, reveal themselves as false. It is only the sum of all possible trajectories that allows for the inference of valid understanding.

Thus, it is thanks to the “interference patterns” between different stories and the material obtained by superposing fragments and temporal segments that new visions of reality are produced.

James Joyce called “epiphanies” the manifestations that sometimes emerge on the surface and imply objects, things, dialogues and people: an impromptu revelation of a double nature and radiant spirit normally hidden behind the carapace of daily life. In the succession of such shifts in perspective, it can happen, as in Ulysses, that a clock, a simple piece of urban furniture in a Dublin street, can be transformed, with its dial, into a spiritual eye that probes the darkness. 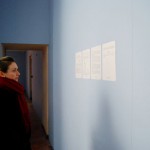 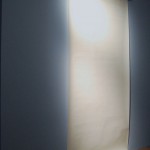 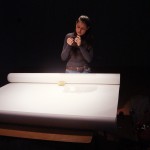 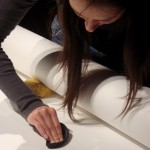 For my installation at Musée du Temps, I will carry out two performances. One will be entirely private and invisible to the audience. The second will be performed in the public space of the city, but will not be announced.  The traces of the events will make up the exhibition.

Le Lit Horloge / The Time Keeping Scroll painting
(In collaboration with Nadège Maïon).
In the first performance, I punish a bed for the possible adulteries that could have been committed in it. I do so, by dragging it around the city of Besançon and slowly disintegrating it. The performance lasts as long as it takes for me to disintegrate the bed. While I do this, Nadège Maïon will stay in the space at the museum. She will be making an invisible drawing every hour, using an object that she has found in the city. The drawing will become visible when I return with the dirty bed and turn it on the top of it. The collaborative drawing will in the end measure 10 meters and will be displayed like a Chinese scroll painting. 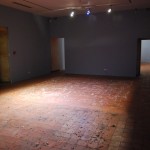 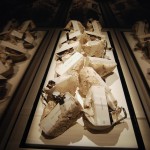 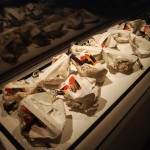 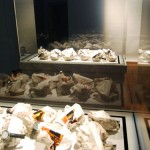 12 Odyssey watches and 12 Ulysses watches
I construct 12 Odyssey watches and 12 Ulysses watches by drilling a hole in the books, putting a stainless nut and bolt through them and attaching a cheap watch to each. I use all of them for one hour each to clean the floor of one of the two rooms of the exhibition. One can see what time I have started to use each watch, since they will stop when I dip them into the water. The surface that I clean will also be slightly smaller than the surface of the entire floor, so that the audience can see which part has been cleaned.

Mustard and Wasabi Watches
Along with the traces of the two performances, I will present the text “Mustard Watches” by logician Jean-Yves Girard. It will be displayed in English and in a new French version which the author has translated specially for the exhibition. 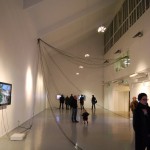 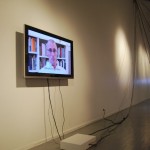 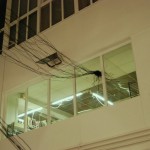 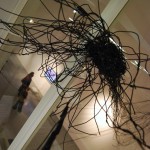 In the main space I’ve installed five videos where you see people who appear highly concentrated and are engaged in mysterious activities. They are all in the process of creating a mental, practical and philosophical space in which to live and work. It is unclear exactly what they do, but all of them are busy developing a new relationship with the reality that surrounds them. 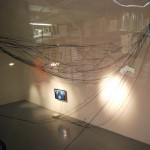 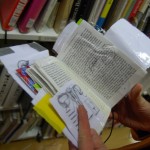 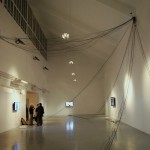 Once you delve deeper into the five people’s universe you become aware that the boundaries between them remain extremely porous. A person in one film might actually be another character in another video, who in his turn might be conjuring up the image of another person using unknown plants or machines.

The Books
Each film is displayed on a monitor that is connected to an intricate net of electrical wiring that spreads out in the entire space and which ends up in the library, which has a window overlooking the gallery. The wiring continues inside the library and at the end of each wire there is a book, which I have specially designed for the exhibition.