Noise of the Sacred and Profane 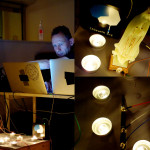 On December 12, 2021, Per Huttner will present a performative lecture at Index in Stockholm. The presentation takes its starting point in Pauline Curnier Jardin‘s work and her exhibition entitled “Waiting for Agatha, Sebastian and all the Other Holy Children.” The goal of the event is to support her in the making of a future film.

Both Pauline’s work and Per’s performance investigate the relationship between the sacred and profane. He will show excerpts from and reflect on the films “Medea” (1969) by Pier Paolo Pasolini and “Stalker” (1979) directed by Andrei Tarkovsky.

Huttner will also improvise sounds that are influenced by signals that he gets from a profane object (a scalpel) and a sacred object (a plastic statue of the virgin Mary). Together they form a musical trio, but since the innate objects (apart from when there is a divine intervention) do not really generate any signals, the trio relies heavily/heavenly on noise from the EEG technique in their musical collaboration. 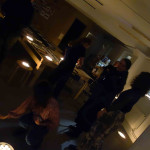 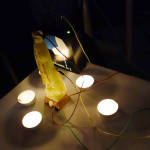 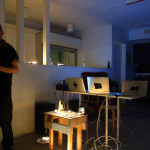 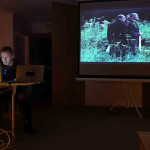 Below you find a sketch for the lecture part of the event:

Today I will present a performative lecture which takes its starting point in Pauline’s work. The goal is to support her in the making of her future film.  Both her work and my talk investigate the relationship between the sacred and profane.  I hope to learn new things and  I also hope you will learn something – so engage in collective learning.

Today, we will look at some clips from two films. As you hear I am adding some music. The sounds are influenced by signals that I get from a profane object (a scalpel) and a sacred object (a sculpture of the virgin Mary). We are a trio.

We live in a society where we believe that most things are rational and scientific. The world is almost entirely profane. What do I mean? Well, most of us are convinced that everything in the universe can be explained rationally and scientifically. However, when we look a bit closer, this is far from true.

For instance, our understanding of space remains deeply coloured by the sacred. This holds true both for geographic space and the space of the body. Let me explain. The spot where you kissed another person for the first time or where a beloved family member is buried both hold a different meaning to you from a parking lot or supermarket. So places are far from equal, they are filled with meaning.

The same holds true for the body. The places on the body that we allow a lover, a parent or a stranger are very different. In order to bring attention to a stranger who has dropped a glove, we do not touch him or her between the legs. We tap them on the back or on the shoulder.

These traits, qualitative hierarchies in space that are illogical from a rational or scientific perspective, you find in virtually all off Pauline’s films. The cave in “Grotta Profunda” is profoundly different from the world outside. The bodies that appear in the grotto speak of the differences in bodies. Similarly Saint Agatha’s breasts in “Fat to Ashes” and here on the wall also investigate our conception of the body and what distinguishes sacred bodies from profane bodies.

So what is the sacred?

Let’s look at a clip from Tarkovsky’s Stalker from 1979. You probably know it, but lets recap. In the film a place has appeared, no one knows how it came to be, but it is different, dangerous and can also bring great magical gifts. They call it “the Zone” and it is sealed off so no one can enter. In the Zone there is a room that can make people’s innermost desires become real. In the film a Stalker, who is a person who guides people illegally inside the Zone, is taking a scientist and a writer to visit the room – in order to have their deepest wishes realised.

In the sequence we will see, the three have just entered the Zone and the writer shows that he hasn’t gotten used to being in the Zone yet. Or rather because everything looks totally “normal” in the Zone, they he has no way of knowing how different it is from the world they know. The tall man wearing a hat is the scientist, the balding man in the black coat and plastic bag is the writer and the younger man with short hair is the Stalker. 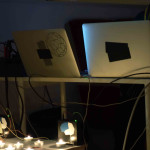 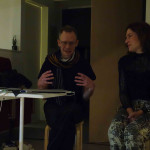 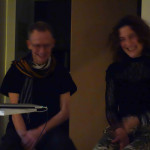 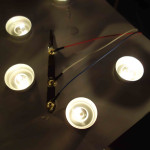 So like in all narratives there is change. We see the writer entering with his bottle and his rational mind. He finds the Stalker and the Zone a bit silly and pretentious. He refuses to listen to the Stalker’s advice, because he has not experienced the difference between the “normal” world and the “reality” of the Zone. With the most subtle gesture (a breeze and a sentence) Tarkovsky or the Zone show the writer something else, something unexpected and powerful. The writer immediately understands that there is fundamentally different logic inside the Zone from what he knows. He becomes terrified and through the event, he becomes a different person, a more humble being.

In the profane world, everything is there for the taking. We can use plants, animals, rivers, the sea, the minerals in the soil and mountains as we wish. The world is a smorgasbord of objects and assets, that members of mankind can use as he or she sees fit. We can consume. We are not obliged to be grateful or respectful. But Tarkovsky shows us that something else is possible. Mankind can have a different and deeper relationship to the world in and around him/her.

Tarkovsky shows that we are not simply subjects surrounded by objects. Instead we have the choice to be in a constant and deep dialogue with what is around us. The world is full of mystery and beauty. What I am getting at is that the presence of the sacred is not necessarily a religious consideration, it is more importantly metaphysical and  political. Like the writer in the Zone, the sacred changes how we understand ourselves and the world around us. It makes us humble and grateful.

In order to exemplify what I mean, I will now show another clip. This time from Pasolini’s Medea from 1969. You are all familiar with the play. You know how in the end Medea avenges her husband Jason who has taken a new wife. She does so by killing their children.

Like many of Pasolini’s films it dwells on how men and women lived when they had a profoundly different relationship to the world around them than we do in our post- enlightenment world, today.  Phrased differently, he investigates man’s relationship to nature. To give an example: This is what the centaur, Chiron, who raises Jason, says to his young protege:

Everything is holy and the whole of Nature appears unnatural to our eyes. When everything seems normal to you in nature, then everything will be over!

From a profane point of view, everything in nature seems normal. So what it is like when nature has an element of sacredness about it? Let’s look at what Pasolini suggests. We are in Colchis, where Medea and her brother oversee a human sacrifice. What we see is a fantasy. But a profoundly humane and political fantasy. In the beginning of the scene we see the whole village leaving the place of dwelling to go to the place of worship (that are separated.)

Followed by: Musical improvisation and a Conversation between Per Huttner and Pauline Curnier Jardin.