Per Hüttner participates at Normalcy at Moderna Museet, Stockholm 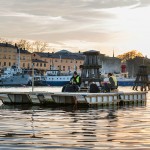 In 2011, a group of artists embarked on a trip in the Stockholm archipelago in search of a lost island. According to marine archaeologist Atle Baekken, the existence of this island had been kept alive in myth and song within the old villages of the archipelago. However, the knowledge about it has been lost as the archipelago has now been transformed from a place of subsistence (fishing, farming, etc.) to a gigantic touristic resort attracting thousands of sailors and wealthy owners of summer homes. In an attempt to rediscover the island, 8 artists set out on an expedition to follow the traces of this island. On this trip, one hundred guests were invited to testify to the discovery of this island.