New Collaborations in France and the UK 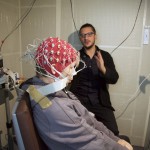 After the successful launch of the Brain Control Club in October, Vision Forum now develop a collaboration with École Normale Superieur in Paris. The project is focused on recording Per Huttner’s brainwaves under hypnosis together with hypnotist and neuroscientist Hernan Anllo. The signals will first be treated by his colleague Stephen Whitmarsh using the EEGsynth and they will be used as a starting point for a musical composition by Jean-Louis Huhta. This recording will be the A-side of a 7″ single that 1+1=3 will release in 2017. For the B-side, Huttner will listen to the recording, again under hypnosis. This second recording will be treated by Whitmarsh and they will be used for a second musical composition by Huhta.

Huttner has also travelled with Vision Forum to London and Bristol to investigate the possibilities of further research in dialogue with neuroscience, psychology and robotics. The team involves Alan Winfield from Bristol Robotics Lab and David Mcgoran at Rusty Squid. The team involves also participants who have worked with us for a long time with projects such as OuUnPo and the EEGsynth.