- Performance part of Local Minima, performed in front to the closed psychiatric hospital Helix in Huddinge, May 20, 2017.

Double Helix formed a part of Local Minima, where an international group of artists and researchers explored the mathematical and psychological concept of local minima. The exploration took the shape of a coach tour through off-sites in Flemingsberg and Huddinge, south of Stockholm. It was part research, part game, part performance that took the audience to unfamiliar locations to discover unknown worlds. As the journey progressed through various landscapes, they were invited to interact with their fellow passengers, artistic works, scientific presentations and situations. 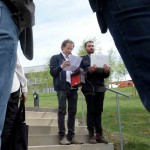 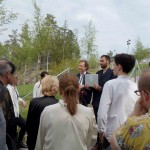 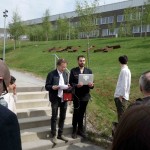 This is the text that Huttner read into the microphone as he escalated the stairs with the audience:

(1) We now stand in front of a set of stairs. Stairs like any other, that lead up to a building. For most of us these stairs, this building will never have any special significance in our lives. For a few it is a place of employment. It is certainly both a very demanding and rewarding place to work. But for some people walking up these stairs they will have a very specific meaning. It will be a life-defining moment. Because those who have committed a crime under special circumstances will mount these stairs knowing that in the building it will be decided if he or she is a criminal or a mad person, a human being incapable of controlling his or her actions. Let’s take a few steps up.

(2) In most instances in our lives there are shades of grey. In most human interaction there are gradients. Judgements are passed with humanity, with the intention that everyone is in the process of participating in the creation of a better situation for as many fellow humans as possible. Hopefully we avoid judgments in order to create a future where love between human beings is the guiding principle. But, the people who walk up these stairs will be judged. They know that with absolute certainty. When they are judged, no gradient exist. Inside the doors of the building that you can see, you are either a criminal or insane. There are no in betweens. No shades of grey. Is human love compatible with this binary treatment of our fellow men and women? Let’s take a few more steps up.

(3) We can all rationally understand why this process exists. The people who function within the boundaries of society need to be protected against those who do not. But I would like us together to reflect on what this institution, these stairs and the prize-winning building above it say about the values of our culture and heritage – about our outlook on our lives. In order to do so, I would like you to imagine these stairs and the building above it in another cultural context. I am not talking about another country in Europe in our day and age. But I want you to imagine it in cultures that are profoundly different from our own. Let’s take a few more steps up.

(4) Can we imagine these stairs in a culture built on a Taoist philosophy where balance between opposing forces is the guiding principle? Can we imagine Helix in a culture where defining aspects in life as good or bad is seen as a weakness? Would these stairs exist if our culture would acknowledge that madness in certain contexts is considered an ideal, like it is in Taoism? Could we imagine a society where there is balance between obedience and crime as well between sanity and madness? If so would crime and obedience communicate; would madness and sanity engage in a dialogue? Let’s take a few more steps up.

(5) Can we imagine these stairs in a culture where Voodoo is the prevalent metaphysical principle? In the culture of Voodoo the boundaries between the living and the dead remain open. The dead exist among the living and are experienced by their living family members. In such a culture, how can we define justice? Is there justice for the dead? Can we even make a clear distinction between crime and madness? Could the dead judge the living? Would the victims of crimes be a part of the process creating justice? Or is a anyone who communicates with the dead by default already insane? Let’s take a few more steps up.

(6) You are all familiar with the French philosopher René Descartes who recently died in central Stockholm. He was invited by the Queen of Sweden to teach her about love. Unfortunately they didn’t get along. And even worse, after 4 or 5 meetings with her he came down with pneumonia and died. Descartes famously created the cogito. “Cogito ergo sum, I think therefore I am.” But we need to ask ourselves, whether Descartes was always a thinking man. Was he a thinking man when he was asleep? Was he a thinking man when he made love to Helena Jans van der Strom? Was he a thinking man when he was delirious with fever on his last day in Stockholm? The answers to these questions are not important to us. But they are crucial to the people who walk up these stairs to be judged, because the reason why we consider each human to be responsible for his or her own actions is connected to the fact that Descartes created the cogito. Before that, things were different.

However difficult it might be to imagine, a man or woman who committed a violent crime in ancient Greece would not necessarily have been considered responsible for that act. The people around the perpetrator would have said, “poor so and so who was possessed by a god and therefore not responsible for his or her actions.” Can we even imagine a society where humans are not responsible for their own actions? In other words, when we look at history or another culture, we do so through the spectacles of the recently deceased Descartes. We wear his goggles the whole time, even though few of us aware of it. Let’s take a few more steps up.

(7) I call this performance Double Helix, because Helix is the name of this prize-winning building. But the title also calls into question to what degree our expressions of violence come from genetic sources and to what degree they come from cultural sources. And also whether all violence falls under the same umbrella? Could certain forms of violence and love co-exist, for instance?

We are all familiar with violence that is born in a momentous rage. Brawls in bars, fights between opposing football fans and crimes of passion show that most people can lose control in certain contexts. But let us put that aside for the moment and focus on violence that is socially and ideologically driven. It is a violence that is based on moral grounds. The people who incarcerate do so based on moral grounds. The state that imprisons does so, because it considers that it has a moral right or a moral obligation to do so.

Another French philosopher who lived in Sweden for a time and who suffered the “Nordic gloom,” Michel Foucault argues that discipline creates “docile bodies,”ideal for the economics, politics and warfare of the modern industrial age. Bodies that function in factories, ordered military regiments, and school classrooms. But, to construct docile bodies the disciplinary institutions must be able to constantly observe and record the bodies they control. Most of all they need to ensure the internalisation of the disciplinary individuality within the bodies being controlled. That means, discipline must come about without excessive force through careful observation, and moulding of the bodies into the correct form through this observation. Let us think, do these stairs and the Helix building support the creation of docile bodies? But most importantly, why are the bodies inside not docile like ours? Let’s take a few more steps up.

(8) Foucault also wrote about madness. He means that modern man has lost all communication with the madman inside. We lack a common language with the insane. The move in western thinking from “madness” to “mental illness” at the end of the eighteenth century constitutes a death of a dialogue with the mad. It expels from memory all those imperfect words, of no fixed syntax, spoken falteringly, in which the exchange between madness and reason had constituted before. The language of psychiatry, which is a monologue by reason about madness, could only have come into existence in such a silence. Maybe it is worth our while to consider these words as we think about the location of Helix? Why is it so far removed from the centre of Stockholm? Maybe it is worth our while to consider these words as the walls around Helix come into visibility? Why are they so high? Is there a reason why madness and criminals remain so invisible in our society? How would our lives change if they had a voice? How would our feelings towards them change? Would we hate them and their visibility? Or could they somehow become integrated into our everyday again? Could we recreate a dialogue with the mad?

(9) We are now on top of the stairs. Take a moment to think about the violence in your life. When was the last time you were submitted to a violent act? Was it a physical act? Do you sometime feel that you are submitted to psychological violence? What is the relationship between the two? (pause) When was the last time you totally lost control? How did it feel? What did you do? Ponder what you have done in moments of rage. Consider what your limits are, what you would be capable to do in a moment when you totally lose control. (pause) Now consider that a group of total strangers would judge you based on those actions. A group that can only confine you to two categories (pause). Amo ergo sum. I love therefore I am. I will ask you one last question: If those actions were carried out because of love, would that change anything? Is love madness, or is it a crime? To love without boundaries can be very dangerous today. 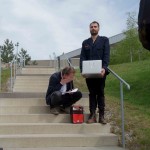 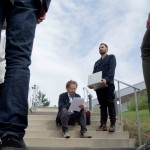 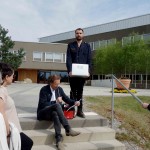