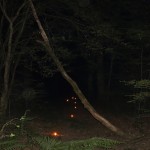 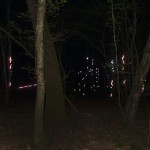 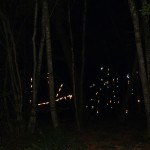 As part of the outdoor festival “Back To The Trees” organised by ISBA in Besançon and Le Saline Royale in Arc-et Senans Per Hüttner participated with a performance that took place when total darkness had descended on the forest. The project happened in the middle of one of France’s largest forests. The artist had chosen the spot furthest away from the entrance to the event. Here the visitor met a person who invited them to move further into the darkness by following a line of candles that indicated a route into the black forest. The audience experienced the performance one at the time. They were told to follow the candles and at the end of the route they would be given further instructions.

When a visitor approached the end of the row of candles, movements would start to appear in the forest around the trail. At the end of the row of candles, a black-clad and hooded character stepped out from the darkness. He bid the visitor welcome in a whisper and asked him/her to put their left hand on a tight rope that was suspended in shoulder-height. The visitor continued his/her journey by following the rope into the blackness. The visitor was asked to look up into the trees and by doing so, the spirit of the forest would appear. The instructions were clear: Stop and return when you encounter an object attached to the rope. If visitor were to walk past the object, the guide could not ensure their safety.

Once the spirit of the forest appeared, the visitor returned to the festival by walking back along the same route. The installation was very well received and one of the visitors even asked if she could stay with the spirit forever.

“Back To The Trees” took place close to La Vieille-Loye, which is a commune in the Jura department in Franche-Comté in eastern France. The estimate for the 2004 population was 363. “Back To The Trees” more than quadrupled the population. More info and geographical descriptions here.

A special thank you to Fabien Guillermont, Laurent Devèze and Julien Cadoret.