- Performance at Museo Jumex, Mexico City April 22, 2017 in conjunction with Native Foreigners in collaboration with Documenta 14 and De Appel. 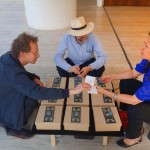 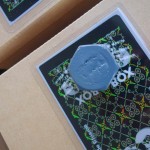 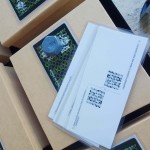 The performance is a conversational piece and draws inspiration from Ulises Carrion’s “Gossip, Scandal and Good Behavior.” It starts before the broadcast and last the duration of the radio show. It focuses on dialogues both with the visitors to “Native Foreigners” and the general visitor to the museum.

The goal with the conversations is threefold:

During the performance Huttner sit on a low stool in front of a low table. He is dressed in subdued clothes. In front of him on the table there are 9 wooden boxes. There are 3 low stools, inviting the visitors to join me. On top of the boxes there are cards that read ‘gossip card’ (in spanish/english).  When flipped over. there is word/instruction in English/Spanish that open for exchange around gossip. Inside the boxes there is a page/quote from different books that can rearranged to create gossip.

Huttner engages in conversations with the audience and other visitors to the museum, using the cards and informing the visitors that he wants to become a better gossiper. The cards and texts are starting points for dialogues reflection on gossip as well as the every day lives of the visitors. Throughout the performance a loudspeaker is hidden under the table randomly playing sequences from Ulises Carrion’s “Boxing”.

Native Foreigners  is a ubiquitous radio broadcasting in Ulises Carrión’s footsteps curated by Sara Giannini. It was organised by Unfold, in collaboration with Jumex Museum, Mexico City, De Appel, Amsterdam and documenta 14. It takes the shape of radio broadcasting event that inaugurates the building up of its upcoming last issue of Unfold dedicated to the work of the Dutch/Mexican artist Ulises Carrión.

The radio show brings together Carrión’s fans and scholars alike across space and time with discussions, readings, and performances from all three cities. The radio show addresses the resonance of Ulises Carrión’s oeuvre in contemporary culture, as well as discusses current forms and strategies of (artistic) self-determination beyond, behind, or within institutions.

Three radio stations are temporarily installed at Museo Jumex, De Appel and Parko Eleftherias in collaboration with three local web radios. Local audiences are welcome to join the event in one of the locations, while everyone, everywhere can listen to the broadcast on the world wide web.