The Sound of Brainwaves – A presentation of the EEGsynth 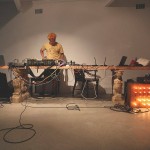 Over the last two years, Jean-Louis Huhta, Per Hüttner and Stephen Whitmarsh (collectively : 1+1=3) have been researching the parallels between brain analysis and sound synthesis, as well as the potential of brain-controlled synthesizers in music and artistic performance. They developed their own real-time brain-controlled synthesizer they call the EEGsynth. The project remains completely open-source, which means that anyone interested in exploring the relationship between the brain and sound performance can use it and contribute to its development.
The idea of controlling music or musical equipment using EEG is certainly not new and has been around since the 60s. However, science and technology have advanced greatly since then, allowing a much broader participation in experimentation with brain measurements and sound synthesis. What is possible now? What could the future offer in this exciting field?
At EMS you will find out more about ideas and technology in the field. You will hear about how 1+1=3, in their next project will draw inspiration from Iannis Xenakis, who radically challenged ideas about music by letting his compositions be controlled according to the rules of stochastics (degrees of randomness). With the emerging possibilities of neuroscience controlling sound and composition, Xenakis ideas will be rediscovered in a new and stimulating manner. With the EEGsynth project the developers invite you to explore these questions and also to connect, to experiment, to learn, and to collectively push the boundaries of what is possible.
On October 7, you are invited you to a unique opportunity to hear about how the EEGsynth has been developed, how it works, and how you can become part of its future development. Jean-Louis, Per and Stephen will present their experiences of working around the globe (Brazil, the US, France, Germany and Greece) and will give a live demonstration.

Let’s explore the future of music together!