Per Huttner solo show in Stockholm 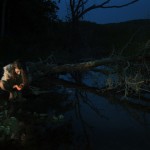 Galleri Fagerstedt is proud to announce Per Huttner’s second solo show with the gallery. The work in this exhibition is the outcome of a research journey undertaken by artist Per Huttner and fashion designer Emilia Rota in Guatemala and El Salvador in May and June 2016. The investigation set out to better understand the concept of “wayob” which in both ancient and contemporary Mayan language mean “sleeping.” But sleep here also indicates “nagual” which means a capacity to transform one self into animal and to move between different realities. In other words, in Mayan ontology a person is made up of three parts: a waking self, a sleeping self and an animal self.

For a westerner, the meeting with wayob is therefore a meeting between two profoundly different worldviews, not only on identity, but on the constitution of the universe. In order to interact with this outlook, one has to reconsider basic conceptions about nature and our own individual place in the world. The project creates bridges between worldviews from different times and different places. In a reality of infinite movement where there are also different layers, there is a need for dialogue between the different parallel worlds. There is a need for the “nagual” or a trickster. Characters like these recur in many indigenous Amerindian cultures. The trickster is dualistic someone who can both protect and cause harm. The photographic images depict transformations: people, creatures, characters in process of becoming something else and moving between worlds. They also depict the sensuality that can be associated with such transgressions, journeys and the potential that is inherent in the rediscovery of our bodies.

In the sculpture that is central to the exhibition the audience can discover how the research has led to the release of hidden powers in the human mind and body. The work is made up of curtain that covers the back wall of the gallery. A bed protrudes mysteriously a few inches from the wall, disappearing into another world. The curtain is made of the same material as one of the characters in the photos wear. Along the bottom light moves back and forward according to a complicated and unpredictable pattern. The light is a translation of the artist’s brain activity under hypnosis. It was recorded at Ecole normale supérieure in Paris in November 2016. It uses special technology that has been developed by the artist in dialogue with neuroscientists in France and Holland over the last three years.

Performance
In conjunction with the exhibition, Huttner and dancer Carima Neusser will present a collaborative performance. The work is a platform for the individual member of the audience to reflect on what role that emotions play in his/her life. Are we prisoners of our fears or do we follow our wishes and desires? What are the dangers and rewards that await us in life if we follow our emotions? The performance mixes the formats of lecture and meditation into a seamless whole to reflect on these and related questions. The artists use sounds, lights, images and meditative texts to invite the audience to participate in a collective journey in order to find hidden pleasure and beauty in their every day.

During the duration of the exhibition Per Hüttner will present new performative work at Museo Jumex in Mexico City, Albumarte in Rome and at Fullersta Gård in Huddinge. The sculpture has been developed with kind support from Kulturbryggan and the exhibition is supported by Vision Forum.