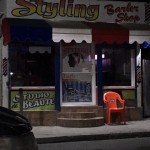 Per Huttner is participating in the 6th Ghetto Biennale in Port-au-Prince November 30 – December 20, 2019. The project is a collaborative effort called The Revolution Hub. Within the framework of the project a group of European and Haitian artists carry out performative investigations and create artistic performances. The Revolution Hub is a place where artists bring ideas and where these can meet the local community and be moulded into performances. Together the participants will investigate the relationship between performance and revolutionary traditions. All revolutions have had a strong performative expressions and clearly defined aesthetics. Revolutionaries develop revolutionary music, visual art, choreographies and fashion to enthuse the people and impress its enemies. The Revolution Hub investigates how these traditions can be studied and used as platforms for new performances. It asks how revolutionary traditions can be used to create new artistic expressions practices that mould European and Haitian traditions into new mixes?