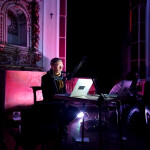 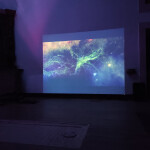 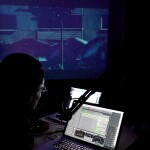 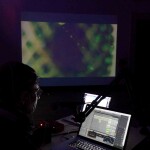 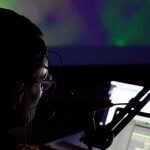 In the performance, Per Huttner influences the sound and moving images by measuring his own brain activity using electroencephalogram (EEG). The EEG is a way of recording brain activity on the surface of the scalp and has a major impact on the artistic output. The artist uses technology that he has been developing together with neuroscientists, musicians and other artists since 2014, called the EEGsynth.

The artist needs to go onto a meditative state in order for the EEGsynth to work well. The more relaxed he is, the more dynamic the signal becomes. With the help of the music, singing and slow repetitive images he invites the audience to enter into a light hypnotic state together with him. The video’s were especially made for the occasion and focus on dark abstract images that from time to time can be recognised as close ups of natural settings.

For the performance Huttner has deliberately used a different approach from his earlier work with the EEGsynth. He retained a more open and intuitive approach to selection of images and sounds. The music is more minimal and allows the listener to get a clearer grasp of how his brain activity influences the sound an images.
The performance was divided into two parts The first lasting roughly 15 minutes and the second around 10 minutes. The second part borrows sound elements and images from “The Power of Ontologies” that was performed a few weeks earlier in Helsinki.

The presentation was co-produced by Vision Forum and Gremio Caldense and was supported by Helge Ax:son Johnsons stiftelse.