The Foreign Meets the Foreign. About Per Hüttner’s Jogging in Exotic Cities. 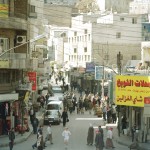 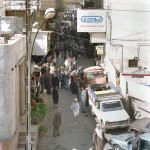 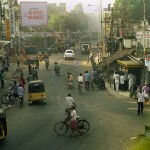 New places that one is only superficially familiar with are often hard to get an overview of. This holds particularly true for big cities. This is natural, particularly in relation to places like Mexico City with over 20 millions inhabitants. To a certain degree cities of this size remain impossible to grasp even if you are born and brought up there. Layer upon layer of modernity and history, institutions, buildings and structures – visible as well as hidden – complicate a solid understanding. And more than anything these are places for innumerable individual, interlinked lives – each and every single one an entire world in itself. Every representation of this complex entity remains, out of necessity, a generalisation, but the level of abstraction varies. It is thus of great importance to pay attention to this, since abstractions and simplifications are driven by different motives and thus its consecquences vary greatly. 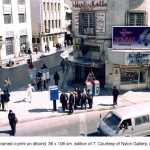 The cities that Per Hüttner has visited in his ongoing Jogging in Exotic Cities project has been, and still is a site for a specific form of generalisation that is embedded in the concept of ‘exoticism’. For more than two centuries the exotic has provoked specific fantasies about oriental sensualism and drama as well as palm trees and sun kissed beaches. It is often seen as something positive, which in itself is an expression for a fascination for the different and foreign. This benevolent point of view – seen from the other perspective also hosts a whole array of problems that have been intimately examined by postcolonial academic studies. It is evident that it remains limiting to be the locus of the projections of the dominant culture and its romantic ideas and scientific scrutiny. Ever so often these stereotypes perpetuate and manifest the idea that occidental culture remains the norm. Who defines the norm along with questions in relation to its self-proclaimed universality remain central to the discussion, but also who has the right and possibility to define oneself – or rather the lack thereof. 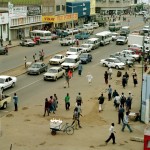 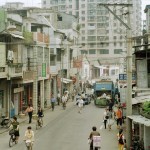 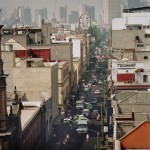 In the series Jogging in Exotic Cities Per Hüttner approaches these questions in a surprising and humorous fashion. He does so through the choice of location, the title of the work – and not the least – through the action that preceded the actual photographs. He has not only visited these selected cities and found routes where he can jog, but he has also sought out vantage points from where to document the performance that his jogging actually constitutes. In these strikingly beautiful photographs (which remain both staged and documentary at the same time) one can see – with almost graphic clarity – the completely white jogger amongst the coloured inhabitants. Even his way of moving deviates from the surrounding crowds and his presence creates an absurd situation. It is if he was pasted into the urban landscape and was not there for real. 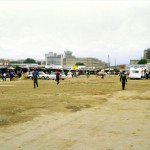 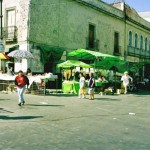 In the heart of the problem of generalisation there is a carefully retained distance and this pertains to geography as well as emotions and culture. To see something as exotic constitutes a way of creating distance. At a sufficiently great distance most phenomena become understandable – even the megapolises of this world. There lies an implicit danger in this: that the level of abstraction is pushed so far that what is depicted becomes unrecognisable. If the field of vision remains limited even a massive city becomes comprehensible, but in an entirely different way. It is often like this things work, people live their lives in neighbourhoods and communities where groups of different kinds congregate – i.e. middle class craftsmen and academics or the poor of the slums; but they can also be ethnical groupings such as in the ‘china towns’ around the world. Per Hüttner’s sudden appearance in such a context along with his differing looks and behaviour followed by his equally abrupt departure the moment when everyone had started getting used to him becomes a remarkable break with the predictability of the everyday experience. When one regards Jogging in Exotic Cities it is easy to loose oneself in the teeming and detailed depiction of the everyday life, but the images lure us into seeing things from the ‘other side’ – a street corner in Amman or a shop window in Lusaka. From the point of view it becomes apparent that the project’s title might as well has been A Peculiar Business in Familiar Cities.