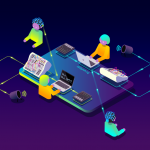 Per Huttner will participate in the relaunch of the first project that was cancelled due to the Covid-19 situation. The Nordic group of musicians and artists were meant to meet in Copenhagen with the Untitled Biofeedback Project April 15-20. Now they will meet in Stockholm, since travel restrictions make it hard to organise workshops anywhere else. We are generously hosted at Kungliga Tekniska Högskolan for the event. The project sets out to build further on the hardware and software development of the biofeedback platform “the EEGsynth.” Members of the network have been involved in the team of developers since its inception 2014 and the first meeting sets out for the Nordic participants to know more about each others’ practices and the potential of the project. The current project will strengthen the aesthetic and artistic potential of the EEGsynth. The goal is to develop technology that can be used by performers to create work where sound, moving images and light are merged to a whole performative universe.